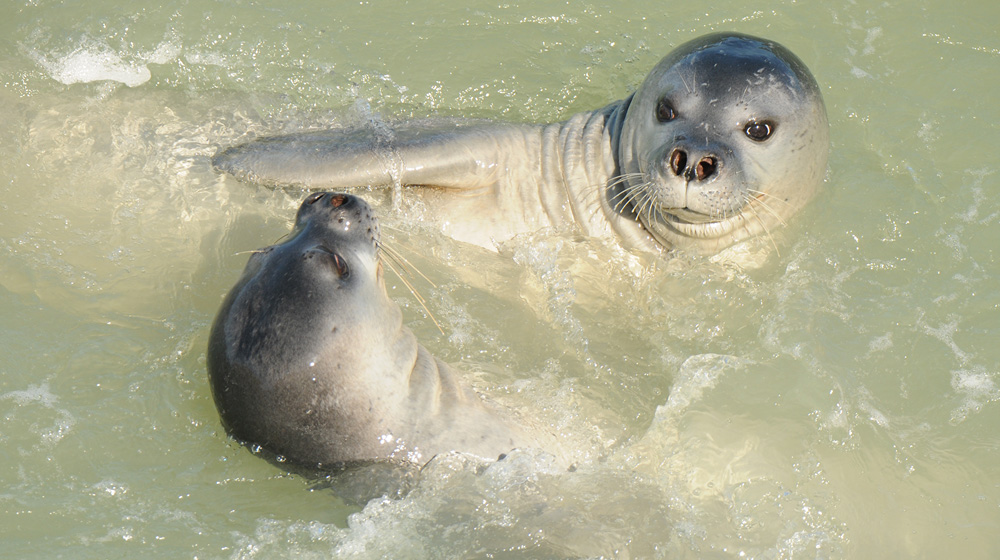 CBD-Hábitat runs a conservation program to reestablish monk seal populations in Mauritania and to sensitize local population about their preservation.

The Monk Seal Conservation Program has been active for 20 years. Through hard work improving protective measures, it has been possible to track the seal population and to undertake many social and educational activities. These actions have enabled an increase in population numbers from 100 to 350 individuals, and the number of pups born each year has tripled. Despite these positive news, there is still much work to do to secure their future.

The collaboration with CBD-Hábitat is the Foundation’s oldest and most consolidated program. Through it, we have contributed to a significant increase in Monk seal population. In 2020, CBD-Hábitat launched conservation efforts in the island of Madeira, where their team have identified several habitats where monk seals could be reintroduced. In addition to the financial support, the veterinarians and biologists from the Parques Reunidos Foundation participates as active members of the program with technical expertise in handling and veterinary assistance.

The Mediterranean monk seal in one of the most highly threatened marine mammals on the planet. Only some 600 idividual remain, spread over three different population groups: one in the eastern Mediterranean (Greece and Turkey) and two in the Atlantic (Madeira and on the western coast of the Cabo Blanco peninsula, between Mauritania and Morrocco). Along with the Hawaiian monk seal, these are the only kinds of seals living in tropical waters, and the similar to a common ancestor that evolved into the current seals some fifteen million years ago. Monk seals are, therefore, a true living fossil facing quite an uncertain future.

The largest monk seal colony survives today on the coasts of the Cabo Blanco peninsula in Mauritania. Spanish organization CBD-Hábitat began its conservation work in that are in 2000, through the program Monk Seal Conservation Program. A year later, with the collaboration of local fishermen and the local authorities, a sanctuary to protect this monk seal population, both on land and at sea, was created: The Seal Cost Reserve.

CBD-Hábitat’s Monk Seal Conservation Program collaborates with other international teams who work with the other populations of this species. Hence, the methodologies developed in Cabo Blanco, like GPS monitoring or photographic tracking in the caves, have been exported to Madeira and the eastern Mediterranean.

Until a few decades ago, the Mediterranean monk seal could be observed on the Mediterranean coasts as well as on the European and African Atlantic. However, over the past years, several factors placed the conservation of this species in a dramatic situation due to:

In 2020, Fundación CBD-Hábitat devoted its efforts to carry on with colony monitoring in the Seal Coast Reserve. The objectives of this initiative include:

After a significant population recovery in Cabo Blanco, the next objective for this project will be the creation of a population network spread over the species’ former distribution area in the Atlantic. The parties involved in this project hope that this objective will help secure the species survival in the long term.

The Parques Reunidos Foundation provides constant support to the protection and monitorization teams from Madrid and in Noaudibhou. The Foundation support the project financially through fundraising and direct donations from the parks.

In addition to the financial support, the veterinarians and biologists from the Parques Reunidos Foundation participates with technical expertise in handling and veterinary assistance to the animals in Cabo Blanco, and they are active members in the creation of new populations.

CBD-Hábitat runs a conservation program to reestablish monk seal populations in Mauritania and to sensitize local population about their preservation.