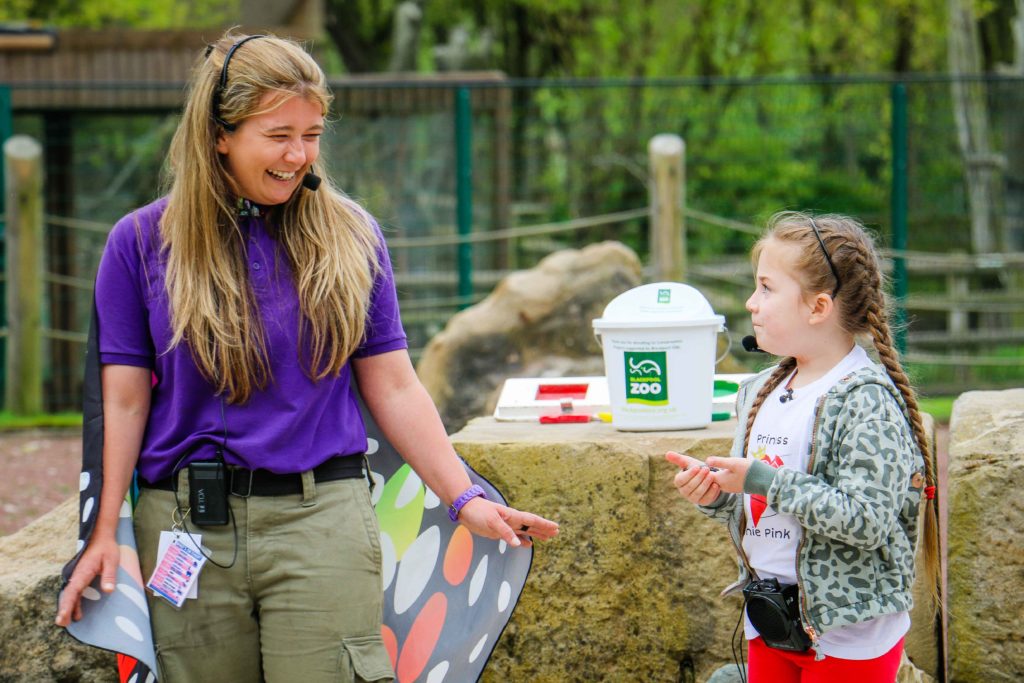 From the age of two she has nurtured anunstoppable passion for insects and her curiosity has turned her into an absolute expert.

The pets she has at home include 16 tarantulas, four centipedes, two scorpions and many, many snails.

Now, at age seven, she has her own YouTube channel called PrincessSophiePink, where she publishes all sorts of educational videos about the her beloved insects’ life habits, and about many other fascinating animals.

The story about Hollie’s interest for bugs reached Blackpool Zoo‘s Education Team, who didn’t have to think twice before contacting her and her family. Their hope was to invite the little girl to explain all sorts of fun facts about her favorite bugs at one of the zoo’s “Big Bug Bonanza” lectures.

Hollie was so excited when she learned she had been invited to Blackpool, that she immediately started researching all possible information about the insects that can be found at the zoo.

Rachel, Hollie’s mother, was almost as excited as the young girl. From the birth of Hollie’s interest for these small creatures, Rachel supported her unconditionally, monitoring her YouTube channel’s  activity -which now has 400 followers– and helping with video editing.

KEEPER FOR A DAY AT BLACKPOOL ZOO

Hollie’s intervention at Blackpool Zoo was a success and was broadcast on the local BBC and ITV news channels. For the seven-year-old girl, the entire experience was like a dream come true and she had the time of her life with the entire Blackpool team. In her own words “it has been great to help everyone at te zoo and I can’t wait to become a zoo keeper when I grow up”.

The staff at Blackpool Zoo who met Hollie were impressed by the job she did at the lecture and by her natural demeanor in from of the audience. For Rebecca Reynolds, Blackpool Zoo’s Education Director “Hollie’s love for all these amazing creatures is fantastic and shows a passion that should be nurtured and encouraged”.

After the success of Hollie’s first visit, Blackpool’s team wants to offer her many more opportunities to become a great veterinarian or zoo keeper in the future. For that purpose, she has been invited to take part in one of the “Keeper Kids” courses organized by the zoo this summer.

Blackpool Zoo is one of the animal parks included with the Parques Reunidos Group. It is located in Blackpool, a city on the west coast of England, between Lancaster and Preston. The zoo officially opened its doors in 1972; today it occupies 37 acres of woodlands and lakes and hosts more than 1,000 mammals, birds, reptiles and invertebrates.

The zoo’s most popular animals are the elephants, the giraffes, the great cats, the gorillas, the orang-utans, the sea lions, the zebras, and the kangaroos.

Along with almost 100 of the best zoos and aquariums in Britain and Ireland, Blackpool Zoo is a member of BIAZA (British and Irish Association of Zoos and Aquariums), an association fostering the conservation, education and care of wildlife. More than 30 million visitors go through BIAZA member institutions every year to enjoy a fun, safe and educational experience surrounded by wonderful animals.

Xavier Manteca: “Animal well-being is essential for zoos to fulfill their mission”